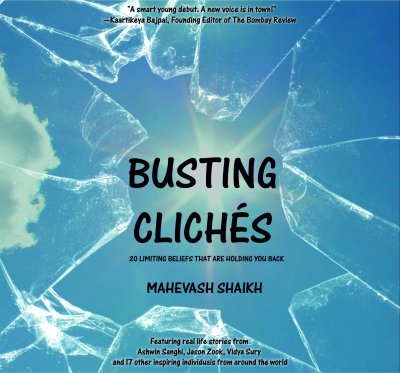 Everyday most of us refer to some situation with oft used phrases. Most times we believe we have used it in the correct sense…it gives us a sense of know-all and we gloat on our knowledge of English language and our ability to describe a certain situation.

But what if I tell you that most of the very commonly used cliches are usually little off the mark of what they actually mean?

Here is a young author Mahevash Shaikh with her debut handbook who busts the misunderstood versions of twenty such phrases.

The size and shape of book itself busts the preconceived notion of a book…at least it broke my preconceived idea of a book. Honestly when the book arrived I was little miffed because it had a look of a pocket book or a cook-book. But later as I read through, I couldn’t help but wonder whether the size was purposely meant to break that cliche?

Each phrase mentioned in the book has its originally intended meaning, the misunderstood version, reference of that phrase in popular songs, a caricature and byte size explanation of what to make of it. There are snippets of comments and quotes by some popular names of the world for each phrase.

The book opens with ‘Look Before You Leap‘ as the first cliche to be busted. It seems that that the common understanding of this phrase is to be cautious all the time. However what it really implies is that before we take a decision, we must weigh all the pros and cons. Like Mark Zuckerberg, the founder of Facebook says “The biggest risk is not taking any risk. In a world that’s changing really quickly, the only strategy that is guaranteed to fail is not taking risks.”

Another phrase that left me thinking was ‘One good turn deserves another’. Most time we expect reciprocation of a good gesture or act and feel miffed and disappointed if that doesn’t happen. And here is what the basic fault lies in understanding this phrase. The real meaning of the phrase is the other way round. It implies that when someone does a favor, we must return it with graciousness when the need arises. But pinning hopes on return of favor takes away the meaning of generosity. What the educator and leadership consultant says is absolutely true: “If expecting something in return is your reason for giving, you really are not giving! If you receive something in returnfor your gift, that is a bonus and not repayment of a debt.”

There are more such every day phrases in the book which have been construed in different context than they were supposed to. The book ends on a positive note emphasizing how our thoughts are influenced by what we think and choose to believe.  A very different book from what I usually read, this one is a light-hearted nudge without being too much preachy.