Book: Into the Abyss 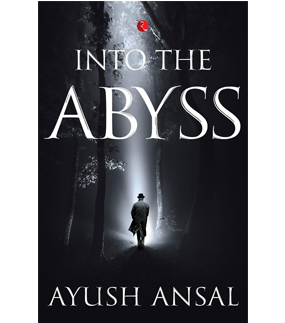 I was introduced to a world of thrillers quite early since my father had a collection of Jason Bourne Series, Godfather by Mario Puzo and Robert Ludlum books. In school as a teenager I was allowed to read Nancy Drew, Hardy Boys and Alfred Hitchcock but at home I had access to my father’s collection.  Later in college I read Sidney Sheldon, Tom Clancy, Robin Cook and many more….It has been a few years now that I have laid hands on books by foreign authors of crime fiction and thrillers.

On receiving the book “Into The Abyss” by an Indian author Ayush Ansal,  I was quite intrigued to read a blurb with characters and story set in London and Scotland Yard detectives appearing now and then.

The story is about a kid Sam Winterfield who witnesses goons kill his parents. He has his heart set on revenge. Growing up he comes across people who play a role in moulding him into a cold young lad. His innocence is lost forever when he kills two other goons without flinching.

Story builds up on a failed embezzlement plan resulting in some gruesome murders. And what I liked was that there was no slackness in spinning the story…events follow and story goes on gradually. The mystery of killer unfolded in small doses and kept me hooked to the story till the very end. And the end was a bit of surprise for me.

The one thing that the author seems to have overlooked while writing the story is that the killer after killing parents of Sam Winterfield, a boy of ten, remarks “When time finally comes, I will be at the end of your road awaiting your vengeance”

But the boy never gets to take revenge himself. Somebody else kills the killer for some other reason. It was not emphasised to the killer that it was for Sam Winterfield’s revenge that he was being shot at.

I was expecting the boy to face the killer of his parents again instead of relying on a mobster to kill him.

Overall the story is gripping and I am ready to excuse the way revenge was taken. Author has made use of his stay in England very well with detailed descriptions of characters and backdrop of story.

A good engaging read for all.