My daughter at 12 years of age either still believes that there really is a tooth fairy or she is putting up a wonderful act and letting me believe that she doesn’t know!!

When her first tooth fell she was somewhere between 5 -6 yrs of age. She saw the blood and had started crying…that is when I introduced this tooth fairy concept to her. She was excited by the story I spun around the existence of fairy and her assistant and forgot her pain and blood. She wanted to stay awake to catch a glimpse of tooth fairy. The story that I told to convince her was….. 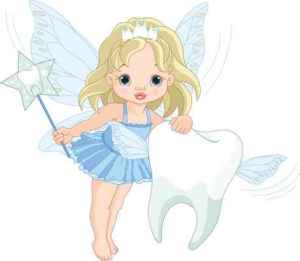 Far far away in fairy land lives a teeny tiny tooth fairy ….she is tiny because she has to quietly take the tooth from under the pillow and place a coin at the same place. Her assistants(mommies !!) stays on earth near every house who has a small child in it.

One day she had a serious doubt because one of her friend found a hundred rupees bill under the pillow. She asked how come her friend who always cried at smallest wound got so much and she got only five rupees. I had to cook up many stories to justify the actions of the five rupee fairy…

Now that she has read about growth of tooth in school she knows fairy doesn’t put it back…reminding me that she has grown up and no story would be logical enough to explain the coins…Sigh!!

Well, it was cute while it lasted…..her curiosity, her joy on finding the coin, her despair when she forgot to hide tooth under the pillow, her excuses to show-off her coin to friends…everything. But no more stories …..truth and facts is what she needs to know from me. And I am wrapping the real world again in softer shades so that she grows up loving the world as she did the fairyland….