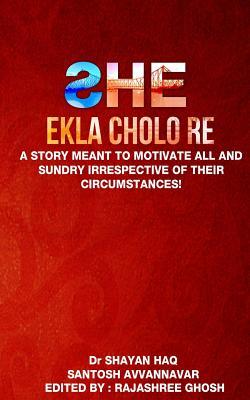 I was travelling when this book was delivered at home. Accustomed to think novel as a at least 200 pages thick, I was surprised to see this booklet thinner than a travel guide!

The story it seemed was based in Kolkata, precisely where I had travelled to on an assignment. My expectations for the story had slightly gone down a bit due to the size of the book and I took my own sweet time to start reading the book.

Inspired by the song by RabindraNath Tagore ‘Ekla Cholo Re’ the story is about the society’s behaviour towards the LGBT community.

It is the story of Kusum who born a boy, prefers to indulge in activities more popular with girls. The father, though a doctor is ashamed of his child’s choice of activities and all hell breaks loose when father discovers the sexual inclinations of the child.

Kusum, falls in love with the son of another doctor, Dr Banerjee,  a friend of father. Both set of parents are horrified and Dr Banerjee shifts his son to some other city. The boys, all grown up meet again after few years and rekindle their relationship. However the societal norms and pressures make the lovers decide that  Kusum undergo a sex-change procedure and become a ‘proper’ female for the relationship to continue. But even after the successful sex-change procedure, the fear of ostracism from the society gets to the lover and he succumbs to his family demands of marrying another woman.

The author has tried to draw attention towards our behaviour as a whole towards the gay, lesbian and trans-genders which is far from empathy. We still consider gay relationships inappropriate and look down upon such alliances. The trans-genders are still not accepted in the normal society and the LGBT community is fighting for their place in the regular social thread of society, just like the protagonist of the story.

After reading the story, I realised that busy with my own everyday life and small problems, even I never gave thought to needs of people who are not defined as ‘he’ or ‘she’ in the society.

The story is an attempt to open up your eye but I wish there was more body to the story and the characters were developed in detail with the agony of the characters, the reaction of parents and the final decision of Kusum to go ahead in the world alone were defined properly. It seems like a hurriedly told story or more like an excerpt. The issue of acceptance of LGBT community is huge and the story does no justice in taking it up.

A great effort but a very short story. Decide for yourself….

I stood staring out of the window, not very happy to see the heavens pouring down. It had been raining since last two days…the roads, clogged with plastic packets everywhere, looked like big drains…Hundred thoughts wrestled in my mind… power outages had left inverter overworked, washed clothes had not dried and maid was on an infinite leave….I stared at load of house-chores without any human or electric gadget for help….

All of a sudden, Shashank, in a rare romantic mood snuggled up from back, nuzzling at my ear…planting little kisses on my neck….

“What..?” Though distracted by his tickling nose, my brain was still thinking about the looming mountain of workload!

“Ummm….” he nibbled on my ear sending a sweet shiver…..“Our first kiss! It was raining as much that day and you were so nervous!!”

Memories…..they ebb and rise just like waves drawing us into their sweet-sad folds!

Yes… I did remember. How could I forget my first ever kiss…. it was only weighed down under responsibilities and duties of married life. A little dusting and the memory showed up like fresh dew drops on the early morning leaves.

Our families being friends, we had seen each other grow up. We had teased, fought and consoled each other till our families shifted to new cities…. We lost touch for many years.

Six years later, we met as two young adults; he a freshly commissioned fighter pilot in the Indian Airforce posted somewhere in Punjab and me, pursuing a college degree in Nagpur. He sought me out and landed at my college hostel…..And I was secretly thrilled at his impulsive act!

Bogged with a nervous energy and loss of proper words, we only managed to convey that each of us had thought about the latter all through those years….We parted as friends again and began the journey of really knowing each other through letters which still lie in a box at home…

Six months rolled by in proclaiming our love through letters before he managed to take leave again…..since our second meeting had the benefit of acknowledged  feeling towards each other, so the day was spent in holding hands, silly laughter, coy smiles and shy longing gazes….just like they show in movies!

By evening when I dropped him at airport, heavens conspired in our favour… sending dark clouds over-burdened with rain. It was a deluge….and the flights were cancelled!

To my pleasant surprise, he returned at my hostel gates dripping wet and grinning sheepishly…

“I forgot to kiss you!” is all he said. Scooping me up, he kissed like there was no tomorrow….sudden, fiercely passionate lingering kisses soaking wet with millions of raindrops… our love sealed with the first kiss, stolen from the world, right on the road!!

Not only did the raindrops on my windowpane, bring memories alive, they also had recreated a perfect setting for a romantic rendezvous.