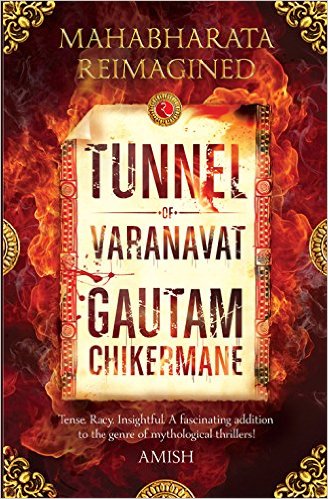 The characters of the epic Mahabharata are as complex as it can get with each one having shades of good and bad, right and wrong, compassion and ruthlessness and the more you read various stories of Mahabharat, more facets to each character are exposed.

Every author has his own version of the individual player from the great epic. While most books I have read have stories revolving around the members of royal family or the estranged son ‘Karna’, less has been written about all those characters that played subtle yet important role in life of Pandavas or Kauravas.

In the great epic, the Pandavs had to fend off conspirators, death threats, fight for their rights and face hardships all their life. But where a political conspiracy brews, bravery alone might not suffice for escaping a bid on life. A warrior besides all his skills needs loyal people around him to be his eyes and ears in a hostile atmosphere, people he can trust to warn him of impending danger around the bend or to fight by his side if the need arises.

And though Pandavas, having spent much part of their growing up years away from palace, royal life and subjects of the kingdom, seemed helpless, alone and vulnerable but their endearing politeness and humility had won them trust and affection of people in and around the high walls of palace. People were ready to make sure that the Pandavas escape unscathed and every attempt to compromise their safety was foiled. Vidur, their uncle cum prime minister of Kuru kingdom, the grand regent Bhishma Pitamah, their grandfather, and their maternal cousin the divine Krishna helped them throughout against the reining blind King Dhritarashtra’s secret wish to see his nephews destroyed.

Duryodhana, the crown prince with his maternal uncle Shakuni, always carried a grudge against his five cousins and sought out ways to kill the Pandavas. In one such conspiracy, he built a palace of highly inflammable lacquer and gifted it to the five brothers with an aim to burn the building while the five men slept at night. However Pandavas escaped yet again through a tunnel under the palace.

Tunnelling is an engineering skill which needs careful planning, knowledge of terrain, soil conditions and accurate execution for it to become a successful escape route. It certainly is not an overnight work. The thought, that the ‘Lakshagrah’ the palace of lac, might have tunnels that could be used to escape either would not have occurred to Duryodhan and his scheming uncle or the more likely explanation could be that Pandavas had a friend in the enemy camp who was loyal enough to construct a tunnel after the palace was built to save them.

This is the aspect that the author Gautam Chikermane explores in his book ‘Tunnel of Varnavat’. Never in the stories was the making of an escape tunnel given its due… Author ‘digs out’ a story about this intricate world of tunnels which permitted royals to escape and be safe.

The chief engineer, Badri along with the prime minister Vidur chalk out a parallel conspiracy in favour of Pandavas and right under the enemy’s nose successfully execute the escape. With a  few impromptu allies the tunnel is dug and enemy fended off.

I simply loved the idea around which the story is woven because in all other stories it was always taken for granted that Pandavas knew the peril and would escape. The author takes the reader under the ground describing the making of a tunnel and the dangers involved. I was almost transported to that era and could smell horses, hear the metal clang of the practising swordsmen, walk through the forest with hidden tribal warriors and feel the conspiracy  brewing.

The story though quite gripping drags sometimes at places. Also I was not convinced of the inner demons, turmoil and webs of tunnel in the mind of the chief engineer. The wolf-dog and his army of wild dogs was stretching the fiction a bit too far.

In all it was entertaining read but could have been slightly shorter even without losing its flavour. Good for readers who love elaborate period stories.