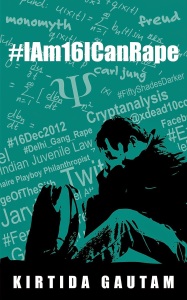 When the nation was rudely woken up from its slumber by the brutal savage Nirbhaya Rape, I overnight graduated from a worried mother to a paranoid one. I will not deny that I have lost faith in men and look at every man other than my husband and father as potential rapists. With this frame of mind, when I heard about this new book inspired from Nirbhaya, I had decided not to read it assuming it to be another frivolous ‘masala-story’.

Then the author, Kirtida Gautam, asked me if I would be interested in reviewing the book. Honestly, I am honoured that the author placed such faith in me.

Kirtida Gautam, a clinical psychologist and an alumna of FTII, Pune did an extensive research on the rape laws of the country and knows her subject psychology well.

When the courier guy delivered the book, I did not start reading it immediately because the word ‘Rape’ gives me a headache. But once I started reading, I wanted to see where the story led to.

The story revolves around a 16 year old Aarush accused of rape. Each and every person who interacts with Aarush has been given a distinct voice in the story and story inches forward with all the characters of the story contributing in the character sketch and thought process of the accused.

The typical thoughts prevalent in the society have been brought forward in the story that for every rape committed it is the girl who is blamed and not the perpetrator. The author has identified through victim of the story how the society instead of sympathising and standing by the victim “withdraws emotional and social support making rape a stigma for the victim”

May be it was my wishful thinking or influence of hindi movies which made me hope for a happy ending and triumph of good over bad but the end of the story was closer to the reality of the society. However being a fiction some things have been exaggerated like the stand of grandfather of accused. The grandfather’s attitude towards the whole incident is that of a compassionate and righteous person that is so desirable but again he is not what real society is made of….I would be so happy to see men like Rudransh Kashyap, the grandfather, in real life who believe in standing for what is right. But alas…

Some chapters on psychology are bit too heavy for me but then those are required to understand the complex character of the accused. Again because the work is a fiction, hence the ability of the accused to think through is understood but in real world men indulging in such heinous actions might not be even half as intelligent.

Author has raised the issue that while we instil the fear of rape, of strangers and of going alone somewhere in our daughters but then why we do not scare our sons of the consequences of raping a woman? Why we let our girls express all their emotions but dissuade boys to show emotions of fear and vulnerability thus forcing them to bottle up and in the process become frustrated? We stop our daughters to go out alone at night but why we do not teach our sons to respect and protect women?

By the time I finished the story, I was angry and felt murderous. The recent news of acquittal of the accused juvenile of the Nirbhaya’s case added fuel to the fire and I felt the need to stand against the juvenile rape laws of our country. I felt hatred against those politicians who have so carelessly given opinion that boys make mistake when they are growing up…

Rape is not the fault of women and not some ordinary mistake by men…it is an unforgivable crime and those who violate a woman’s body must be punished with an equal magnitude.

Author has handled the issue very delicately. The book is quite a tough read due to the topic itself along with serious psychology…not for readers who want a quick racy story. A poignant and thought-provoking book.