This monument of love is a unique piece of art and architecture with nothing else to beat its beauty in the world. This truly is a masterpiece.

Taj Mahal is a mausoleum built for the queen Mumtaz Mahal( and hence the name “Taz Mahal” – Palace[mahal] for Mumtaz,) by the Emperor Shah Jahan of the Mughal dynasty. The construction began year 1632 and it took almost 22 yrs to build with material sourced from not only India but also China, Tibet, Afghanistan, Persia and SriLanka. The queen died during the birth of her 14th child. The king was devastated and ordered the best of engineers and designers of Persian origin to design an out of the world resting place for his beloved wife. So great was his sorrow that he took to drinking and spent days lamenting for his love. His son Aurangzeb took advantage of his sorry state and rebelled. He killed his brother Dara, the chief contender of throne and a favorite of their father. He imprisoned the mourning emperor in fort of Agra to crown himself and shifted the capital to the Red Fort, Delhi. Shah Jahan spent his remaining days in captivity gazing at the Taj Mahal which was in direct sight of line from the bedroom window. 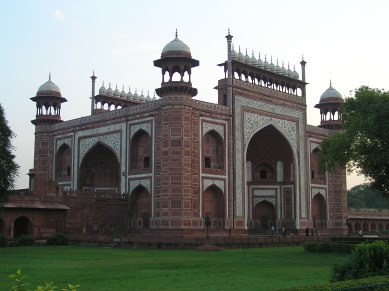 Entrance to the Taj Mahal

looking from taj towards the entrance gateway 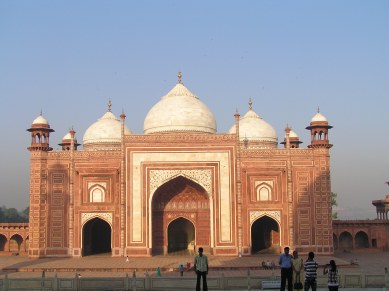 Two identical buildings on flanks of taj mahal…one is a mosque and the other a resting room . Built for symmetery of the whole complex 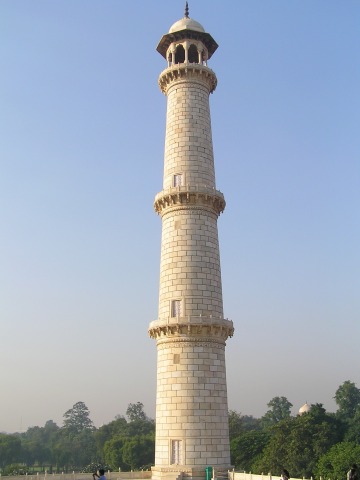 One of the four minarets on four corners.

View of the monument from Mehtab Bagh, across the river

There is no greater love story and no man-made structure to compete with this masterpiece. Couples from all over the world make a beeline to get their picture clicked with this symbol of eternal love in hope that their love will be as everlasting.